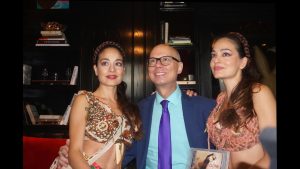 “This rare piece of visual and audio creativity was written, composed, designed, and choreographed by the Indiggo Twins—Mihaela and Gabriela Mordorcea. Based on their 500-page bestseller Wicked Clone or how to deal with the evil, the musical turns the tables on tradition by telling the story of a vampire bitten by a human being.”
(City Guide NY)
“Go for the glam but stay for the supernatural ambience, unique staging, and, of course, the performances: immortal.”
( theatre critic Griffin Miller)
“Wicked Clone The Cinema Musical…A TRANSFORMATIVE WORK OF ART” ( TODAY TIX in “Weird & Wonderful” review)
“A thrilling musical that takes your breath away” NY Post, Michael Riedel
“Wicked Clone is the musical to see!” Zachary Stewart, Theater Mania
“The twins put the super in supernatural” (Theatre Critic Jen Bush)
“Mihaela and Gabriela Modorcea are The Renaissance women of entertainment. They hail from a lineage of intellect and artistic prowess. Their father Grid is a writer, filmmaker and critic. Their mother Violeta is also a writer and a translator. They studied a multitude of arts including dance and musical instruments at a young age.” (Words4Music)
“Go see WICKED CLONE now before it becomes a Hamilton kind of thing, where you would have to pay a lot more…..” Eli Marcus, President Davler Media

Watch exclusive testimonials & audience join Indiggo on stage in the modern “ode to joy”  I AM LIKE GOD written and composed by the “Modern Renaissance” twins themselves and part of their 25 “immortal”-song cast recording released with Broadway Records:

"Wicked Clone The Cast Recording" among "The ShowTunes you need from the Shows you love!" 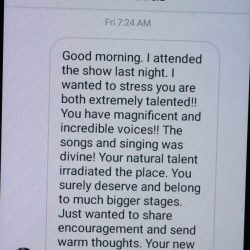 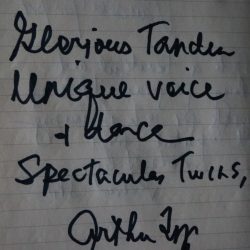 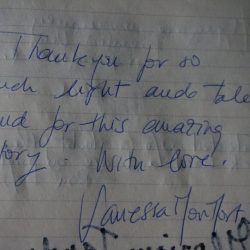 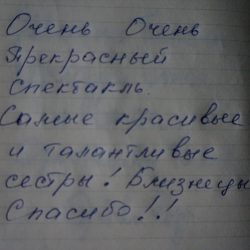 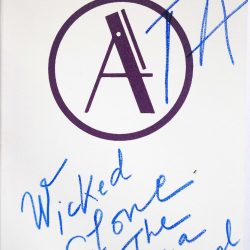 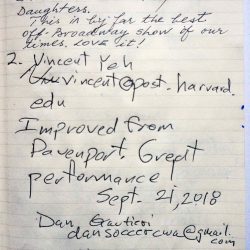 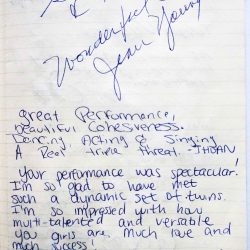 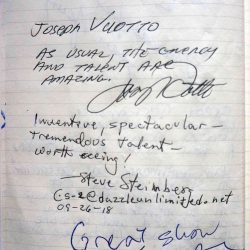 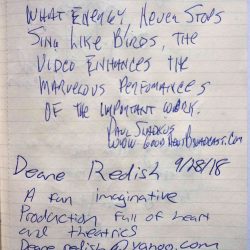 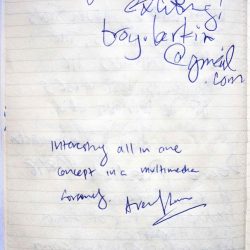 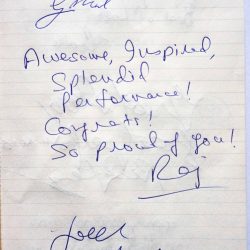 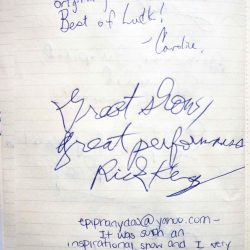 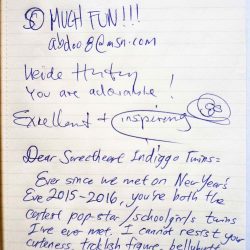 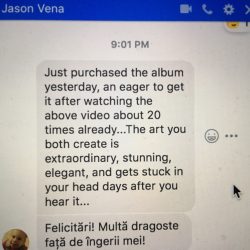 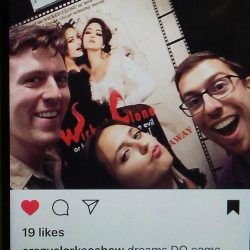 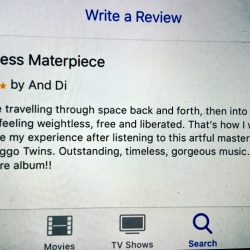 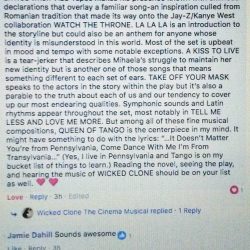 “There is a spooky, and sexy, and thrilling musical off Broadway called Wicked Clone or how to deal with the evil,”  Michael Riedel of the NY Post begins his interview with the “fabulous and fascinating Indiggo Twins” (Indie Pictures) on his radio show “On the Town”. Check out the interview and Indiggo Twins’ performance:

Paul Sorvino, Actor, GoodFellas: “The twins Indiggo’ abilities as writers, musicians and performers are quite exceptional and exceedingly rare in ones as young as they both are. I believe that their versatility and talent will make them both very successful in America.

D. Sonenberg, Academy Winner, Producer When We Were Kings:  “The girls are the real deal. And did you know that they are real Vampires too? Imagine Dark Shadows meets Cabaret and you will start to get the picture. When their TV show hits the airwaves and their album hits the streets, they are going to be unstoppable!””

“Mihaela and Gabriella are two of the most hardworking, passionate artists I have ever met,” commented Richard Stumpf, President of Imagem Music USA. “It doesn’t surprise me that their talent and drive were recognized by Swizz, Jay-Z, and Kanye when they opted to use them on the Watch the Throne album. The girls are a triple threat as writers, artists and actresses. We are all excited for their upcoming musical and TV show.” 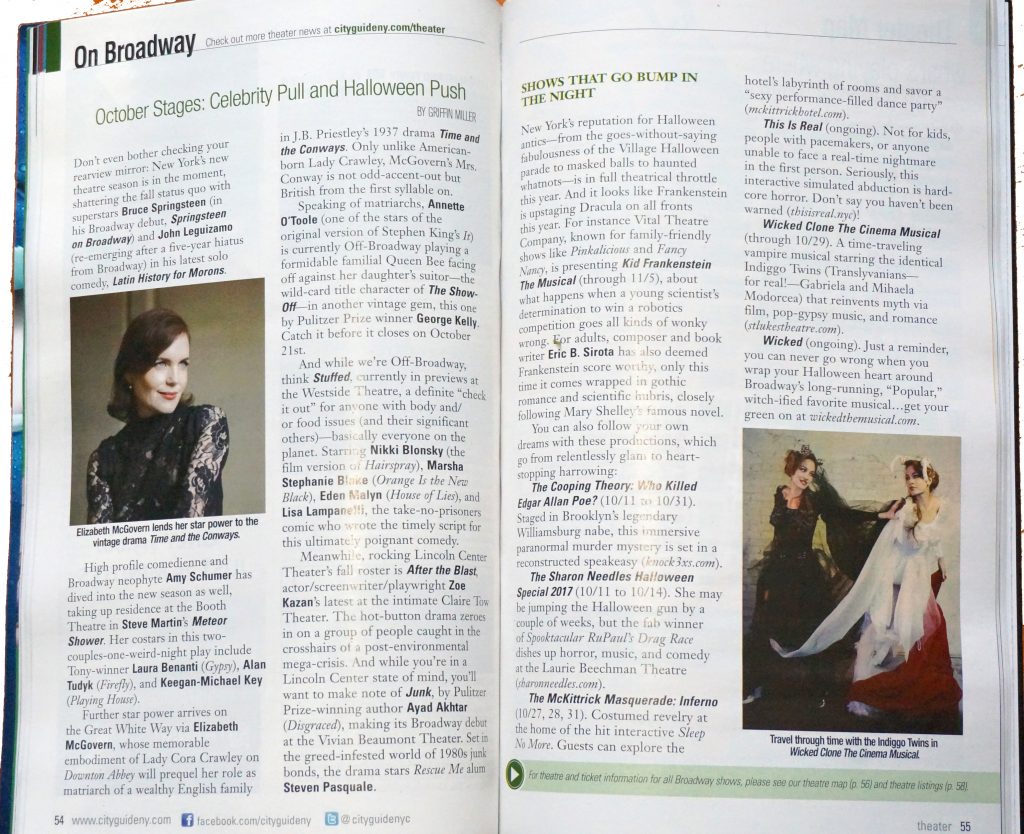 Check out European press on http://www.indiggotwins.com/press

“Wicked Clone the cinema musical is a phenomenal show! The reviews have been pouring in–not just from critics but from everyday people. Many are thrilled to call Mihaela and Gabriela friends. Why is that? Because everyone at their show is part of the experience. And the experience doesn’t end when the curtain closes.”

“Just one word sums up the Wicked Clone’s experience for me at the theater: OUTSTANDING. The combination of cinema, vocals, music, dance, even ad-libs added to a remarkable event in every respect.”

“Mihaela – what a fantastic performance. Would love to chat soon about the show and everything else. Jeff”

“It is a relevant and empowering conclusion to the Wicked Clone play when both heroine Vampires realize that creating life and beauty is what really gives one immortality, not evil manipulation. A powerful and beautiful epiphany that is felt by the audience like a fencer’s epee right to the heart, but with the realization of love, not aggression. Excellent performance!”

“Mihaela & Gabriela, Your cinema musical Wicked Clone is by far the best show in town. Love so much your novel and adore your show. You are the most complex and fascinating double art phenomenon in the history of theatre. Your talent surpasses any imagination. Your strong subject – the strongest in the current literature – creates thrills of revelation. Your timeless music makes happy any creature. I’ve lived great moments of truth, high emotions and happiness that only Art can give us. Your fascinating story is a life model for all of us: Don’t let the wicked clone Play your greatest role! Be a creator, be like God, Watch The Throne!”

“I was SO PROUD tonight. There I was, at St. Luke’s Theater, holding a flyer for Wicked Clone. Tears of joy and sisterly pride were in my eyes. The Cinema Musical of Wicked Clone definitely did the book justice! I felt like I was really there, in medieval Transylvania, and then in Times Square; just as the cinema novel transported me to those places.I also FINALLY got to hear how certain songs go. I knew the words, because of the poetry book; but I finally heard the melodies for the first time. I loved the inspirational message about acceptance, and about being like God. That was very empowering. LOVE YOU, Mihaela and Gabriela, Indiggo Twins! YOU GIRLS WERE AWESOME!!!!”

“I must tell you, I have literally never shed a tear watching a movie or show until last night. It was very powerful. We were totally blown away by Wicked Clone. What a moving story. The cinema alone was beautiful. The costumes were inspired. And the dancing and choreography were transporting. We got totally lost in the story and were saddened when it ended. Thank you, Mihaela and Gabriela for creating such a beautiful show. It’s a great show!! ‬We LOVED the show! We were both wildly impressed! You are very talented. I’m honored to be your friend.”

JSL Radio Chroma / James S. Li, Oct 29, 2017: “The WICKED CLONE show was OUT OF THIS WORLD and I give the WICKED CLONE show three grades of 100% for all the hard work the twins put into it. I give all the credit to the twins for their work. The twins are the sweetest, cutest teddy bears friends I ever had in my life.”

“On October 29th I had gone with my boyfriend and my grandfather, who was a guest in the show, to see the play Wicked Clone. It was truly spectacular.”

“The Indiggo Twins put on an amazing production. They both are extremely talented, very friendly and it was a pleasure meeting them!!”

“The Wicked Clone play’s message, through Indiggo Twins’ artistic creativity, is to inspire people to get closer to God. And to understand that art and vision comes from God and we have God in us. I was personally touched and surprisingly very inspired.”